The USPS investigated the possibility of converting some or all of their current fleet of 142,000 light-duty long life vehicles (LLVs) into all-electric LLVs (ELLVs). The LLVs are the small box-like vehicles that make the final mail deliveries to homes and business in the 50 U.S. states. The USPS contracted with five companies to convert one each LLV into ELLVs. The five companies are: AutoPort Inc., Bright Automotive, EDAG, Quantum, and Zap World. The USPS, not DOE, paid the five conversion companies directly to convert the existing LLVs into ELLVs.

Given AVTA’s expertise in previously testing 96 different electric drive vehicle models, the USPS requested support testing from the AVTA. DOE’s AVTA tested parameters such as energy efficiency and range per charge under various test cycles and speeds, payload impacts, acceleration rates, maximum speed, maximum gradeability, charging efficiency, and time(s) to recharge. The operational fuel costs as well as the drivability of the five LLVs were also gauged. The AVTA assisted in documenting all test procedures, conducted all phases of testing, and reported of the test results. 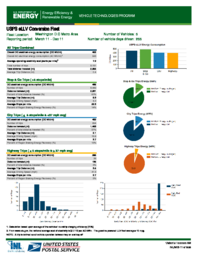