The ChargePoint America Project was led by ChargePoint with ARRA funding support from DOE. The project deployed 4,647 residential and commercial charging stations in nine U.S. regions. The data collection phase of the project ran from May 1, 2011, through December 31, 2013, and captured over 1.5 million charge events. Quarterly reporting started during the January to March 2012 time period. It should be noted that the only way INL was able to count the number of EVSE deployed was by reporting the number of EVSE reporting data. INL was not tasked with field inspections.

ChargePoint, which was originally known as Coulomb Technology, was tasked by DOE to deploy EVSE in the following metropolitan areas of the United States:

The primary objective of the ChargePoint Project was creation of jobs and development of a PEV charging network, which would facilitate analysis and study of where future EVSE should be installed. 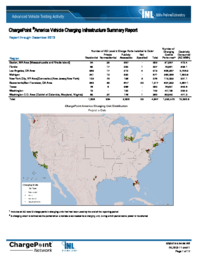